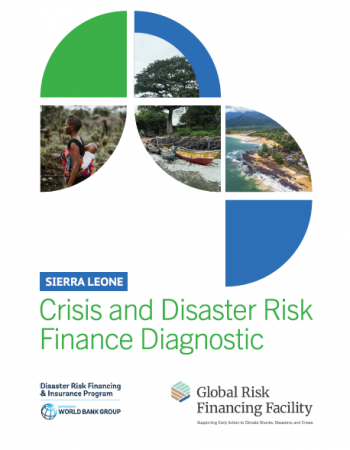 Sierra Leone remains vulnerable to the financial impacts from a variety of disaster-related shocks and crises, including large annual floods, epidemics like Ebola, and man-made hazards such as severe fires.

As a country, Sierra Leone is very reliant on ex post assistance for response and recovery. For instance, in the aftermath of the Ebola outbreak, over US$700 million was received in financial assistance from development and humanitarian partners. Whether in the aftermath of regular flood events or large flood and landslide events such as those in 2017, the country remains dependent on aid from international partners. But despite regular donor inflows for disaster response, Sierra Leone remains without a robust system for tracking the use of donor funds. Given this long-standing support from donors, the lack of well-developed systems for response, and the vast competing development challenges that must be managed with a fiscally constrained budget, Sierra Leone’s shift toward proactive financial planning will take time.